AdaN’s call for artists is to use/reuse, or in other words to ‘borrow and steal’ past works of other artists, in order to refer to historical values, as a way to revive them within a contemporary context. The intention of this ‘call for artists to borrow’ is conceived by AdaN as a response to this new society, wherein the existing value system has been destroyed due to the careless relation towards history and the constant acquisition of artworks (whose value is determined by mainstream culture). AdaN’s ‘call to borrow’ reflects the necessity for the protection and revalorisation of artworks/cultural artifacts.

The episode centres around the way in which the artwork Three Smart Heads has been created. All of the elements of this artwork have been ‘stolen’ or ‘protected’ by AdaN. ‘Head 1’ is a work by Jordan Grabuloski, from the collection of the Museum of Contemporary Art, Skopje. AdaN has allegedly ‘borrowed’ this artwork from the collection, so that the artwork cannot be stolen by gang members or sold off at an auction by one of the elicit ‘businessmen’ who dominate the economy/societies of future pre-apocalyptic times. ‘Head 2’ is a ‘found object’ – an stone object, found and recuperated from the street; ‘Head 3’ is a concrete cast of an old fashioned computer monitor, originally used as a door-stop for a large garage door.

This episode recounts how, in this age of scarce resources, new artworks should be created only through the reuse of pre-existing materials; artists are encouraged to engage in ‘borrowing’ or even ‘stealing’ other objects, in order to create new forms and meanings from them, while maintaining the past embedded within them.

Selected images from the episode: 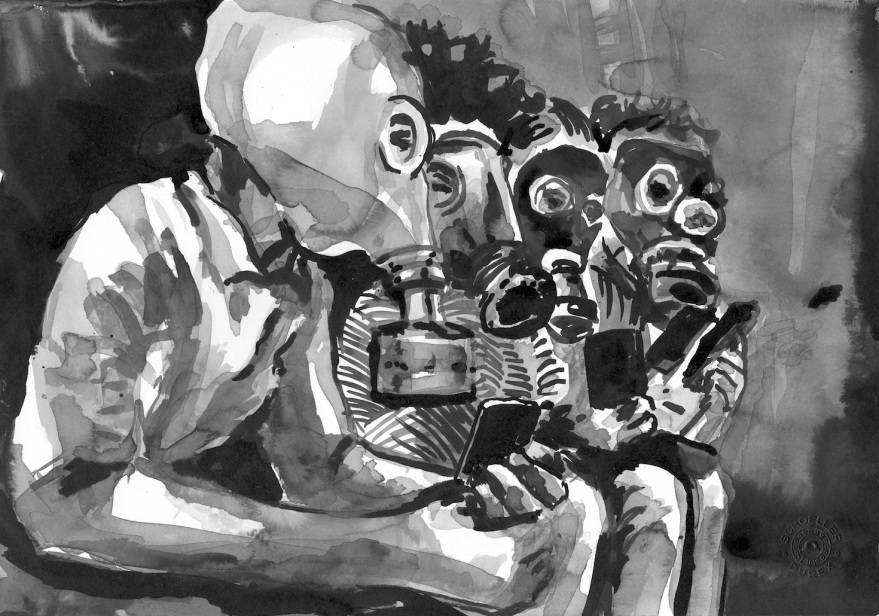 ‘AdaN, a Call to Borrow, Reuse and to DeArtify’

Influenced by the global crisis, which implies that the possible end may not be only imaginary, Nada Prlja poses a series of questions reflecting on our situation in the world today, while questioning what it means to be an artist today, through the form of a graphic novel.

The graphic novel is situated in the present (2020), but the novel occupies an imaginary time and represents conditions which are ‘fast forwarded’ to pre-apocalyptic times. In this scenario, people live underground, as pollution and deadly viruses have made living above ground a near impossibility. There are no longer any common rules that govern the world, where the values of camaraderie or coexistence have been amputated from human feelings and behaviour; instead, a sense of self preservation dominates the population. In these desperate times, Nada Prlja creates Adan, her own alter ego who, as the superhero or heroine of this graphic novel, is forced to find appropriate alternative ways of working as an artist in an era of pre-apocalyptic conditions.

The project ‘AdaN, a Call to Borrow, Reuse and to DeArtify’ portrays a world in which alienation, paranoia, isolation and greed dominate the future-possible environment. The project sets itself against such a potential future. The four episodes of the graphic novel provides a set of ‘instructions’ geared towards the creation of a better common future and one in which superheroes will not be needed, as we conclude that camaraderie and solidarity is the only viable option for the future.

The project ‘AdaN, a Call to Borrow, Reuse and to DeArtify’ consists of more than 200 drawings, presented in the form of the four episodes of the graphic novel, accompanied by a narration written by Nada Prlja’s brother and acclaimed fiction writer, Branko Prlja.

The graphic novel ‘AdaN, a call to Borrow, Reuse and to DeArtify’ is published in conjunction with the exhibition ‘AdaN, in the City of Fire’ (27.12.2019-21.02.2020), a solo exhibition by Nada Prlja at the Museum of Contemporary Art, Skopje www.msu.mk.