The installation What Would Happen if We Succeed? consists of a number of live trees in pots, a water canister, with an invitation for gallery visitors to water the trees, in order to help keeping them alive and to support their growth. With this action, the artist investigates the relation between work and pleasure.

＆In the gallery space, there is a group of trees that need watering in order to survive. I am encouraging the gallery visitors to give free labour, through the act of watering the trees. This act is an invitation to contemplate the relation between labour and leisure in relation to socialist times – when labour was seen (or at least, it was meant to be seen) as a part of leisure.＊

During socialist times, initiatives such as the forestation of the countryside, or the building of new roads, were all organised and realised by volunteers who used their human force (their labour, their work) for the reconstruction and improvement of their war-devastated cities and countries.

The work part of the exhibition Loophole to Happiness

Loophole to Happiness sets out to locate and explore the freedom-enhancing loopholes that exist on the margins of repressive social systems from East European communism to global capitalism. Faced with the perfection of techniques of absorbing criticism and the systematic mobilisation of our creativity, sociability and sentiments for economic ends, the search is on for new forms of resistance to the endless pressure of production. The exhibition takes the inventive strategies of worker resistance under communism as the starting point for fresh attempts to imagine exceptions, find escape routes and evade the smooth surface of today’s neo-liberal capitalist order.

The title of the show comes from the cult book A Worker in a Worker’s State by Hungarian dissident Miklos Haraszti, which deals with the exploitative working conditions and bold acts of worker resistance he witnessed during his time at the Red Star Tractor Factory in the early 1970s. He describes the practice of making ‘homers’ – objects crafted by the worker in defiance of regulations – as an outlet for creativity and agency that disrupted the monotony of factory life and challenged the exploitative system of piece-rates. The sociable creativity involved in the making of homers can be contrasted with the post-Fordist situation, in which creative urges are siphoned back into the economic cycle and emotional energy is channelled into competitiveness at work.

The exhibition brings together works which consider the adaption of the lived environment to the demand for continuous connectivity and the economic mobilisation of human affectivity, while proposing modes, attitudes and lifestyles that liberate time for enjoyment, travel and learning. Escape routes from the rules and rationale of the contemporary social and economic order are discovered in unexpected places, from painterly evocations of social celebrations during communism, to meditations on the freedom of play in public spaces. The aspiration for happiness and self-fulfilment is contrasted with the mental pollution emanating from information overload, while other works focus on attempts to revive non-capitalistic forms of knowledge and promote uneconomic attitudes in human relations.

FUTURA, center for contemporary Art, Praha. Link to the exhibition

Book about the exhibition 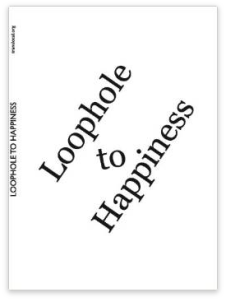 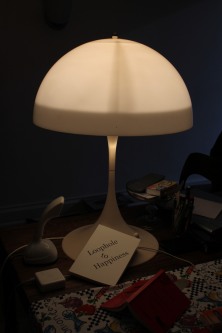 About the book: Loophole to Happiness reassesses the left critique of socialism through the work of dissident theorists and artists, reviving the spirit and working methods of the neo-avant-garde to suggest contemporary routes to escape the smooth surface of capitalism.